Chimborazo is Ecuador's highest mountain and it is the point on earth, which is closest to the sun. 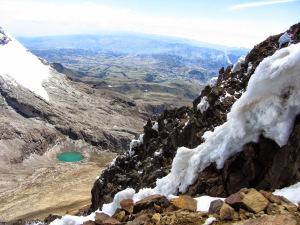 Climbing Chimborazo: Chimborazo is climbable year round however, the best climbing months are June and July and December through early January. February through May is known for bad weather, especially in the month of April. Make sure you start before midnight so you'll be back before 10 am at the latest, for two reasons: First, rock fall hazard. The part of the route along The Castle, a large rock wall about one hour from the Refugio Whymper, gets dangerous around that time. Lots of small and large rocks start to fall down then from this high wall due to warming temperatures. Passing this area (El Corredor) later in the afternoon is really running between falling rocks. Secondly, clouds will most often roll in early in the afternoon, making route finding very difficult. As there are big areas of crevasses on both sides of the normal route, losing track can be very dangerous.

Longtime considered as the highest mountain on the planet, Chimborazo's summit is the farthest point one can get from the center of the Earth and still be on land. It is about 2160m farther from the center than Everest's summit. This is only possible because the Earth is in the shape of an oblate spheroid, i.e., it is flattened (squashed) at the poles and bulging at the equator.
Chimborazo is an extinct volcano located in the Western Cordillera, 150 km (95 miles) southwest of Quito. For this climb you need ice-climbing equipment, excellent physical condition and lots of stamina. Climbers must also acclimatize their bodies to the high altitude conditions before attempting to summit Chimborazo. Most of the time, it is not a difficult climb but there are periods when hard ice conditions make it very challenging.

There is some discussion about the actual height of the summit:
There is some debate on the actual height of the mountain. In 1993 members of the School of Military Survey in Newbury, United Kingdom measured Chimborazo's altitude with the use of a differentials GPS and got a measurement of 6,268 m. It is claimed they reached Cumbre Veintimilla (under foggy conditions) or the second highest summit which actually has that altitude. In a clear day Cumbre Whymper or Maxima is located in the back of it (visible from Cumbre Veintimilla only) and it can be reached after descending and traversing a couple hundred meters in east direction. However, at the moment, the most accepted official height is 6268M. 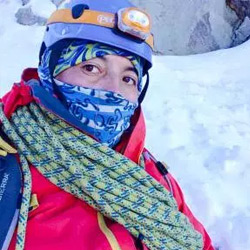 My name is Fernando Iza . Since 2004 I have been a Mountain Guide based in Latacunga, Cotopaxi's capital. I offer day trips from Latacunga or Quito, as well as longer excursions to the jungle and the coast, and mountain summit treks to Cotopaxi and Chimborazo (Ecuador's highest peak).

Take a look at the example tours here, and don't hesitate to contact me with any questions you might have. Thanks for visiting.

Our team is excited to share with you our invaluable knowledge of the local environment and a history of local traditions and customs. We will ensure you experience the best of Ecuador; climbing majestic mountains and volcanoes, enjoying panoramic vistas overlooking crater lakes and finally relaxing with a satisfying hot meal after an adventure filled day.

The coronavirus will not stop our activities, we know that, after this pandemic we are going with more energy.